50% off A Better Finder Rename

October 19, 2014 by Peter Bockenhauer
Great app I have used for a few years to do file/folder renaming. It's great cause you can create some pretty complex naming workflows. Purchase for $9.95 (normally $20) at MacUpdate Promo
Category: Deals, Software

October 15, 2014 by Joel Gerdeen
With a new version OS X 10.10 named Yosemite soon upon us, I remembered back to the first version that was released in March of 2001. Actually there was a server version in 1999 that I never used. Yosemite is 11th version for the desktop since the first was 10.0.  I still have a copy of OS X 10.0, code named Cheetah though the box did not have the cat name on it. That version cost me $129. In version 10.1 Apple formally used the name Puma. They continued with big cat names until 10.9 which they named Mavericks. I have copies of all and actually run 10.3 Panther, 10.4 Tiger, 10.5 Leopard and 10.6 Snow Leopard on various old Macs in my collection. Tiger supports OS 9 in Classic mode as well. You can read about all versions of the Mac OS at: http://en.wikipedia.org/wiki/History_of_Mac_OS I am also in the process os scanning all old Mini'app'les newsletters to add to our web site. It appears that the first substantial mention of OS X was in the May 2001 issue where an article from Tidbits was included. Since an OCR of the scan copy required cleanup, I looked on the Tidbits site to find the original. Not finding it, I emailed Adam Engst, the author, who provided the following link: http://tidbits.com/article/6372 .  This article still has good advice as to who should install a new version of Mac OS X and when. If you plan to upgrade to Yosemite, the following is a good resource though there are plenty of other free articles being published. http://www.takecontrolbooks.com/yosemite-upgrading?pt=TB1239&cp=CPN016640904PRE
Category: Articles, Best Practice, Software, Updates OSX 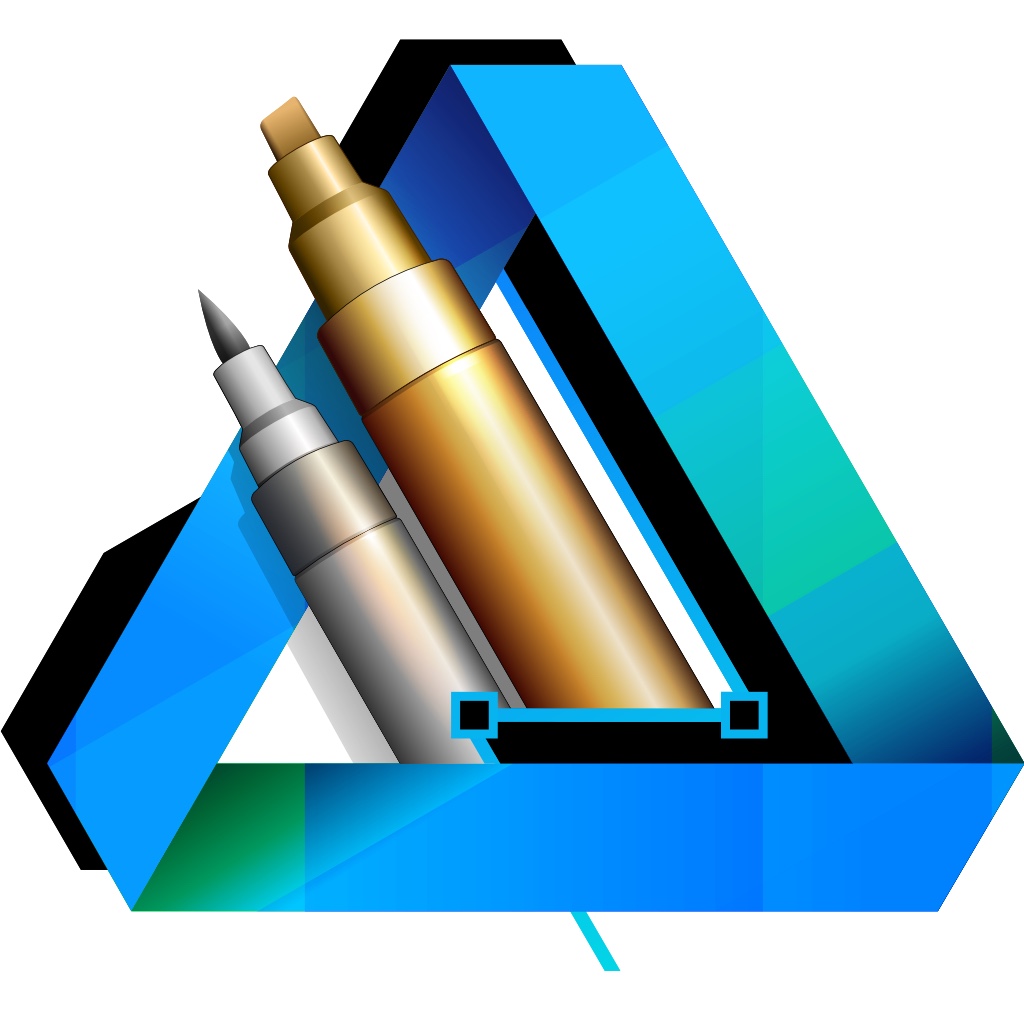 Serif, a European software developer, has fired another shot across Adobe's bow with the release of Affinity Designer. Affinity Designer is professional grade illustration software created for Macintosh. The feature rich application has been out in the World as a free beta for several months and has been well received as an competitor to Adobe Illustrator CC. Affinity Designer will be of particular interest to those put off by Adobe's price structure and subscription model. The application sells for $49.99 (special introductory price of $39.99 until October 8) through the Mac App Store. Serif promises free updates.
A full review of this software package is beyond my abilities—I am Bézier Curve challenged—but the introductory video is impressive, the early reviews look promising and, if nothing else, the interface looks prettier more accessible than that of Inkscape. At forty bucks, the cost of subscribing to Illustrator CC for two months, I'm in.
Category: Design, Mac OS Apps, SoftwareTag: apps, OSX

August 23, 2014 by Joel Gerdeen
I started using Quicken 6 to manage our home budget on the Macintosh back in 1995 and was fairly happy with it through version 2007 when they quit supporting it on the Intel Macs. The first version of Quicken actually was released in 1986 on MS-DOS. I used Managing Your Money on the Mac starting around 1990. I used Quicken 2007 for several more years until Quicken Essentials for Mac was released in 2010. See this MacWorld article for some history of that release plus a promise for a Mac Quicken Deluxe in 2011. http://www.macworld.com/article/1146714/quicken_essentials.html I agreed with a lot of the comments in this article and was disappointed with this new Mac version. Since I was also using Parallels Desktop, I switched to the Windows version which I have been using since 2010. A few days ago, I read this new MacWorld article announcing a new Mac version, Quicken 2015 which is the full version promised four years ago. http://www.macworld.com/article/2597380/intuits-quicken-2015-for-mac-revamps-interface-expands-investment-features.html I was a little leery about putting down $80 just to try this new version, but figured I could always get a refund. So I downloaded it and imported my data from the Windows Quicken 2014. All seemed to transfer ok, even split transactions, account transfers, all accounts and all categories. Since it had been a couple of weeks since I had downloaded transactions from US Bank, the Endura Credit Union and PayPal, I gave that a try as well with the new version. These transfers required reconnecting to the services as if for the first time but worked out ok in the end. At first, my US Bank Visa account did not show up when I connected. It displayed all my US Bank accounts and all the Quicken accounts except for Visa. I downloaded a couple accounts that matched and then retried again from the Quicken Visa account. That then worked fine. The PayPal transactions downloaded without a hitch as well. The credit union required two steps, an export online and then an import from within Quicken. The downloaded transaction also show “Debit purchase” in the Payee field and the payees in the Memo field. This didn’t match any memorized payees from Windows. One big improvement over the Windows version is that transactions are automatically reconciled. Windows Quicken required accepting each transaction even if a matching manually entered transaction existed. It seemed to also match Payees with the memorized categories carried over from the Windows version. Unfortunately, it doesn’t allow editing of the categories matched with the payees like the Windows version did, This new Mac version allows multiple transactions to be edited at the same time, at least the Payee, Category, Tags and Memo fields. Just check which field to enter and all transaction will be changed without affecting other fields. That way, you can select a number of restaurant transactions and change the Category to “Eating Out” in one pass. The edit function also displays all splits and transfers in line with other transactions without the extra steps to open the transaction in another window. One thing that threw me for a loop was the transfer display. The Windows version used brackets [ …] in the Category field to indicate a transfer to another account. The account name was put between the brackets. The new Mac version uses the word Transfer in the Category field and the account name in a Transfer field that is initially hidden. Luckily, when I tried using the brackets, it popped up a message that I had to show the Transfer field (column) first and then enter the account. There is also a free iOS app that syncs with the Mac or Windows versions. It appeared to sync all of the accounts for the past year. I added a transaction on my iPhone and it appeared on the Mac. It also supports photos of receipts, but locked up the iOS app when I tried it. I killed the app, restarted and it worked the second time. But now I am still waiting for the photo transaction to sync with the Mac. I’m sure I will find somethings missing but think this new Mac version has convinced me to switch back from Wiindows. It certainly will save me time. With Windows, I had to launch Parallels, then Windows 7 and then Quicken, all of which took 3-5 minutes. The Mac version opens in about 6 seconds allowing me to use it more frequently. I will post again after I have more experience. Joel
Category: Articles, Software

July 24, 2014 by Tim Drenk
Apple has opened up the beta program for the first million people who download the public beta of OS X Yosemite 10.10. Go to this page and sign in with your AppleID. You will need to agree with the terms and then it will load a redemption page with a code on it for the Mac App Store. Clicking on that will load the Mac App Store and start the Yosemite beta download. You do need to have 10.9 Mavericks running, 2GB of memory, and 8GB of drive space available. The terms of the agreement state you can talk to other people in the beta or developer program about Yosemite and you can talk about things that Apple has announced, but otherwise you can't talk to others about the beta. And if you get stuck with a message in the Mac App Store about the code has already been redeemed, go back to the beta program redemption page and refresh it. It should pull up a new code. Have fun
Category: Software

Welcome to the Mini’app’les Users Group based in the Twin Cities of metropolitan Minneapolis—St. Paul.

We’re a group of Apple users interested in sharing knowledge and experience with other Apple users and owners. Members vary from beginners, to consultants and developers. All age groups are welcome. What we have in common is an interest and a desire to learn more about the Apple experience, regardless of focus. Within the group you’re bound to find someone with similar interests.