December 13, 2016 by Jeff Berg
I’ve recently won a small victory in the battle against the Black Box that is iCloud Sync and currently have a complete and correct set of Text Replacement shortcuts synchronizing across all my Macintosh computers and iOS devices. Warning: Voo Doo follows. I’m not a true expert on the deep inner-workings of Mac OS. I don’t believe my fix will do any harm, but proceed with caution and always make a backup! (Then make another for good measure. Remember the 3–2–1 rule!)

For a very long time (I want to say going back to at least iOS 8?) Keyboard Text Replacement shortcuts weren’t syncing consistently across my Macs and iOS devices. I had varying combinations of shortcuts available depending on which device I was using and no way to get the same set to propogate across all devices At times shortcuts would disappear completely, and reappear as duplicates after I’d taken time to recreate them. This was an annoyance because I make heavy use of a handful of shortcuts and because I want access from all of my iOS apps, Text Expander isn’t an option for me. I tried numerous proposed fixes without success and refused to try a few that I deemed too extreme, complex and time consuming — particularly given the mixed results reported from the killing of these various rubber chickens. I have an open (for months) support ticket with Apple for months — The engineers were aware of the problem, but no fix was forthcoming. With the recent purchase of a new MacBook Pro, I found that the shortcuts weren’t syncing over to it at all. I was temporarily ignoring the problem but in the end I knew this would not stand. Seemingly coincident with the latest round of behind the curtain iCloud adjustments, the system magically started working and after a restart of each device I had a complete set of shortcuts on my iDevices. (So complete that there were multiple entries I’d long ago abandoned and thought I’d purged!) I checked the shortcuts on the new MacBook Pro and was disappointed to find them missing — until I restarted the Mac after which the shortcut list appeared. Thus encouraged, I removed the extraneous entries from the Mac. This didn’t take long with multiple selection. Next I made a few adjustments to the shortcuts I wanted to keep. I was really pleased when, in very short order, this corrected master list of Text Replacement Shortcuts propogated to both my iPhone and iPad Pro. Next stop was my iMac. Opening the appropriate preferences pane revealed its own special selection of keyboard shortcuts that (previously) weren’t at all in sync with any other devices. Okay, I got this. Restarted. No joy. Grrrr. I spent a few minutes re-searching the internet for anything new on the topic. Still a lot of noise and no definitive solutions, but I came across an article that through a chain of “logical leap what ifs” on my part led me to doing a finder search that in the end led me to discover a folder buried deep in my user library: com.apple.InputMethodKit.TextReplacementService. This folder may be a legacy preference/cache because a searching for it on my new MacBook Pro (Sierra native) returns null. I moved the folder to the Desktop and restarted. I immediately opened the Text Replacement preference pane and found the list was empty. However, within a few seconds it was populated with my complete and correct master list of shortcuts. I repeated the this procedure for my account on the MacBook Air I administer for my mother and had the same experience. There was one more device in the mix. I keep a 4th gen. iPad at work for reading and light browsing during breaks. The restart trick wasn’t working on that device — most likely because the guest network is accessed through a captive portal. (I speculate that after the device restart, the iCloud Sync Check takes place before the network connection is made.) Last night I brought the 4gen home to do the iOS system update. After the update/restart the shortcuts are present and good to go. At least for now I have a consisent set of shortcuts across all of my Apple devices and changes made to those shortcuts propogate to the other devices promptly. Finally. If you’re having this problem and  this fix works for you please drop a note in the comments.
Category: Mac, Troubleshooting

December 5, 2014 by Tim Drenk
After upgrading my MacBook Pro to 10.10 (and then to 10.10.1), I experienced 2 problems. First, when I used certain programs, the save dialog box would continually get bigger. So each time I saved something in Safari or BBEdit, the dialog box would get longer by a line of text or so until the bottom was off the screen. I use Default Folder so at first I thought it was a problem with that, but after completely uninstalling it, the problem remained. I figured out some workarounds, like making sure I made the dialog box smaller after a few saves, but I couldn't resolve it. Jon Gotow, the developer behind Default Folder figured out the problem. He found that Apple changed the file dialogs so that the title bar is now considered to be part of the window—and changed the math everywhere except in save sheets. Yesterday, Gotow released a beta version of Default Folder that fixes the problem. It is a beta release but I haven't had any problems with it. If you are affected by this bug and don't use Default Folder, you could use Default Folder's 30 day trial and maybe Apple will fix this in 10.10.2. 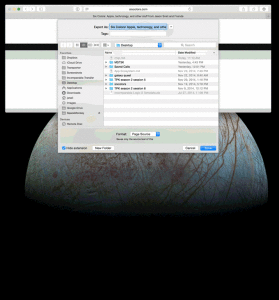 My second problem was I was no longer able to connect to the VPN service, PrivateInternatAccess.com. I could connect using PIA's own VPN app, but I couldn't use built-in app for L2TP VPN. I figured out that my static IP that I set for my local network broke the VPN app, both for wireless and wired connections. I was able to change the setting to "DHCP with manual address" and the built-in VPN worked. Hopefully, this will be another issue that 10.10.2 fixes. I'm sure this affects a pretty limited number of people, but it was very annoying.
Category: Troubleshooting

September 25, 2014 by Tim Drenk
If you updated to iOS 8.0.1 on Wednesday and you are having problems with cellular service and Touch ID, Apple has posted a support article detailing how to downgrade to iOS 8.0. It's a fairly easy process using iTunes. Of course, the upside of losing cellular service on your phone is the battery lasts a long time.
Category: Troubleshooting